Spice of the month: Saffron

May’s Spice of the Month

A vivid and vibrantly fragranced exotic red spice, saffron evokes feelings of prestige, elegance and affluence as it’s known as the world’s most expensive spice!

It is due to this reason – and some uncertainty on how to use it in every day cooking – that saffron is often found lurking at the back of a spice cupboard. 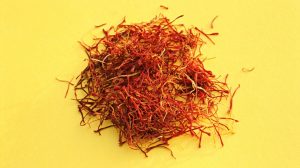 A sweet, floral flavoured spice most commonly used in Asian, Mediterranean and European cuisine, its range of historic uses include medicine for over 90 ailments, cosmetics, fashion and it was even prescribed as an antidote for the bubonic plague.

Saffron has been used as a fabric dye for clothes, to create lipstick, mascara, perfume and also to illuminate medieval manuscripts as it appeared like gold when mixed with egg whites!

Popular as an air freshener during Roman times, it was even used in battle to heal wounds & Cleopatra was reputably said to have bathed in it! 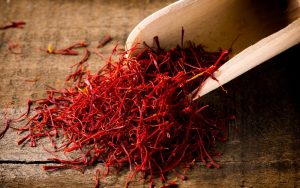 The origins of saffron

Saffron comes from the bright orange-red stigmas of a purple flower called the Crocus sativus, commonly known as the crocus or saffron crocus. It is a member of the Iris family and likes dry and sunny conditions to flourish.

The spice is extremely expensive due to the time consuming, manual harvest, which takes place typically in mid-autumn by hand in the morning, when the flowers remain closed. Each flower has three saffron threads (stigmas) which are removed and dried. A large amount of flowers are needed to produce the smallest quantity of saffron, with 200 flowers needed to produce just 1 gram of dried saffron! The colour of the spice is measured for crocin which is responsible for the aroma, flavour and bright red colour.

Named after the Arabic word for yellow ‘za’faran’ is the colour created when the spice is used in cooking or dying clothes. The spice releases its floral flavour and bright yellow colour when added to liquid such as hot or warm water, stock or alcohol. 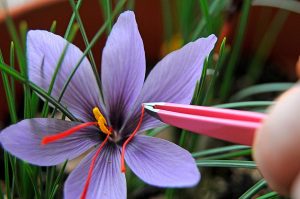 It’s not clear in history where saffron was first grown, or who was the first nation to use the spice, and it has been suggested that it may have been discovered in Iran where 85% of the worlds saffron is grown or Mesopotamia/Greece. From here it was cultivated from and grown in England, India, Spain, Italy, Austria, New Zealand and Switzerland.

Depicted in images in Santorini in Greece – that may date back to 16th century BC or 3000 BC – the first historical images show the use of the spice as a medicine. Cave paintings have been found in Persia and cultivation began in Derbena and Isfahan in the 10th century BC.

Traded by Egyptians, Arabs, Romans, Europeans and Asians, due to its lucrative price, saffron traders were known as ‘saffron grocers’.

Due to the price of saffron, it was widely traded and smuggled & in the 14th century a Saffron War occurred during the Bubonic Plague!

With so much activity in trading and fraudulent saffron being created, the Safranschou code was created by the Nuremburg authorities and death by fire was introduced as one of the heavier punishments for not providing purity in the spice!

Supposedly smuggled over to England in a hollow staff in the 14th century and traded for tin by Cornish traders, it was grown in Norfolk, Suffolk and Essex, with Market Walden changing its name to Saffron Walden! 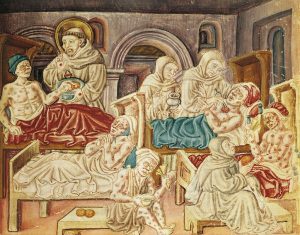 How is saffron used in cooking?

A versatile spice, saffron is delicious when added to savoury seafood, meat or puddings.

Think paella, French Bouillabaisse, chicken and sweetcorn soup, pasta and rice dishes, risotto, bread, saffron buns, rice pudding and ice cream! Saffron is best when added with a liquid to cooking & its flavour develops.  It can also be used to flavour tea or coffee and to spice up cocktails!

Store in a dark cupboard in an airtight container and remember a very small amount of saffron, really does go a long way!

Try adding saffron to paella, risotto or rice by grinding a very small amount with a pinch of salt and teaspoon of sugar and add a couple of large spoons of warm water. 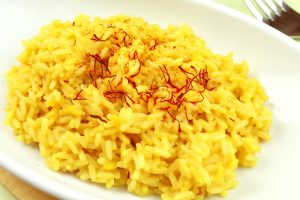 You can hear all about Saffron in our latest episode of the Spice Larder by clicking on the button below. 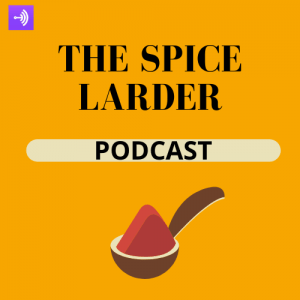